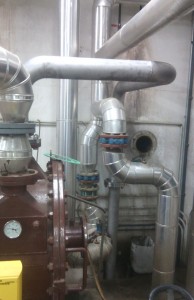 Tecnoconverting´s division for metal sheet forming, Tecsol, has made the substitution of the recirculation and purge of sludge piping, as well as the biogas conductions, all of that made in stainless steel, in one of the most important WWTP of Central Catalonia.

The main difficulty of this work was the hazardousness of extracting old piping, because of high probability of gas accumulation inside due to sludge decomposition, and because of the high flammability of biogas conductions, with methane concentration greater than 50%.

Biogas, in broad terms, is produced by fermentation bacteria, which are responsible for decomposition of organic waste and sludge, in absence of air.

Initially, biogas generated into this plant was used just to heat the same digestion process and mix the sludge; the spare gas was burned into a torch, in order to avoid direct methane emissions to the atmosphere.

For some time, this treatment plant has implemented a cogeneration system in which all biogas produced is used to generate part of the electricity consumed by the same plant.

As it is known, thermal energy is also generated in cogeneration, which is used to heat the sludge digesters and produce more biogas.

Regarding that the waste water plant processes cannot be stopped at any moment, all the necessary works with sludge recirculation piping had to be performed continuously in the shortest time possible so it does not interferes with the several treatment stages of the plant.

Tecsol has amply achieved this challenge, due to the adaptability and commitment of its highly skilled technicians for the customer needs.